10 reasons why your mobile app eCPM is decreasing 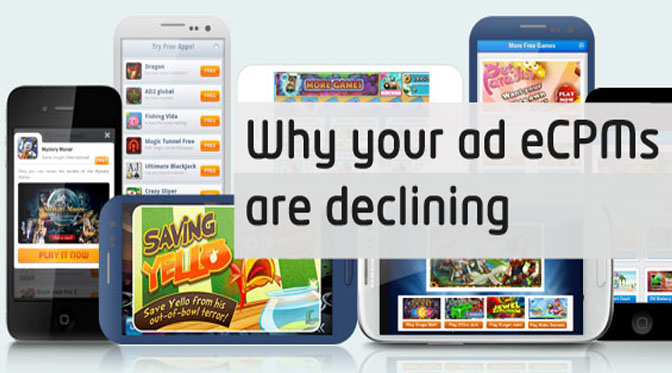 “Why is my eCPM decreasing?” This is one question that all developers will ask themselves at one point if they're monetizing their apps with mobile ads. The reality of advertising includes fluctuating eCPMs day-by-day, and publishers struggling to pinpoint the cause of declining eCPMs. But just because your eCPM is falling, it’s not the end of the world.

You might remember our intro to eCPMs where we proved that declining eCPMs =! decreasing revenue. We identified that eCPM simply measures the quality of the advertisers that are publishing ads on your network.

But in the spirit of troubleshooting your eCPM problem, we’ll help you identify the issue with your suddenly low eCPM by picking apart the traditional eCPM equation - eCPM = (earnings / impressions) x 1000 - and a few slightly more complex versions of the eCPM formula.

There are three ways a publisher can calculate an advertiser’s eCPM to gauge the quality of an advertiser. These following eCPM equations are broken down into formulas that measure CPI, CPC, and CPM advertisers.

If you take a look at these equations, the eCPM from a cost per install advertiser is dependent on three variables: the click-through rate, the install rate, and the corresponding bid price. The cost per click advertiser’s eCPM depends on the CTR and bid price, and finally the click per mille ad campaign’s eCPM is influenced just by the bid price. The takeaway here to keep in mind is that any increases or decreases in these variables will inevitably affect your eCPMs.

1. Low-quality advertisers are driving down CTRs and IRs

The bread and butter of monetizing your mobile app with ads are the advertisers. You might find that as different advertisers and their creatives cycle through your app's advertising inventory, certain advertisers are promoting low-quality ad creatives and providing you with few clicks and even fewer installs. At the same time, other advertisers might not be appropriate for your users. If you look at this formulaically using the eCPM equation from above, if CTRs and IRs decrease from a CPI advertiser, eCPMs will naturally decrease as well.

2. An ad format was poorly deployed or recently changed

If you’re seeing lower eCPMs because you’ve made some changes to the ad formats you've deployed, don’t be alarmed. Some ad formats tend to command lower eCPMs than others as these formats may increase impressions given to advertisers (typically an increase in impressions, will lower your eCPM).

At the same time you might notice that eCPMs will fluctuate if you deployed a panel ad format, for instance, as a full screen take over instead of giving the users the option to trigger the ad format. Or you might have made the mistake of deploying an interstitial in-game instead of in-between games.

If you’ve recently pushed a buggy update, your eCPMs might be plummeting, and if you were to look at the eCPM equation you wouldn't know why. After all, CTRs and IRs aren't directly influenced by impression fluctuations (granted clicks and installs change accordingly). The reason for your falling eCPM might be an issue of brand perception. A study by the Association of Premium Digital Publishers revealed that premium mobile publishers and trust in ads served go hand-in-hand. If the latest unpopular update to your app is driving down your user's loyalty, there's a good chance that these very users are less likely to trust and click on the ads that you're publishing.

Unexpected policy changes to app stores might affect how the ad format you're using can be displayed, or even dictate mobile ad formats you can or can't use. For instance Google recently banned push notification ads and the icon ad format from the Google Play store. As a publisher, not using push or icon ads altogether might mean that the interstitial ad format that tends to generate low CTRs drives down your overall eCPM.

Sometimes eCPM fluctuations are out of your control. The sudden drop in your eCPMs might have very well been the consequence of a high eCPM advertiser ending their advertising campaign or directing their ad spend on users from a different target market that you don’t serve. For instance a game studio might have launched a new mobile game and recently ended its one month mobile ad campaign to promote the game. This may cause CTRs, which were once were supported by high-quality advertisers generating high CTRs and IRs, to decline.

6. Your app is giving out too many ad impressions

Your sudden eCPM decline might just have been a case of giving too many impressions in a single day or week. A higher volume of impressions might end up with your traffic fulfilling the demand of the high paying advertisers’ ads in a short amount of time, driving up eCPMs at first or early in the day (if you're looking at hour-by-hour eCPMs), and filling the remaining inventory with low paying (low bid price) ads, thereby driving down eCPMs.

7. You're not optimizing your mobile app monetization effort

Monetizing from ads doesn’t end with downloading AppFlood’s SDK. You need to continually experiment and optimize your app monetization strategy to continue generating high eCPMs. That might include A/B testing ad formats, avoiding common monetization mistakes, or keeping up with the latest trends and news in mobile advertising.

8. The holidays were just a couple of weeks ago

With bid prices peaking during the holidays, when users tend to be more actively engaging with mobile ads and advertisers scrambling to fill target inventory during this time, don’t be surprised to find that eCPMs decline in the weeks after when advertisers tighten their ad spend and bid prices consequently decline.

9. There are too many middlemen taking a cut of your earnings

Your total earnings from an advertiser might be lower than expected (which if you look at the traditional eCPM equation would correspond with a decline in eCPMs) and you might not realize that the culprit are the middlemen like ad agencies and other ad networks. Because ad networks will buy traffic from other sources, an advertiser's ad might be redirected through multiple middlemen (sometimes as many as four) before it reaches your app. What you end up with is far less than you could be earning, because the ad spend would be split among these middlemen, and a lower eCPM as a result.

10. Fluctuations in an ad network's supply and demand

Publishers and advertisers cycle in and out of ad networks, which might result in a sudden decline in advertisers one month or a sudden influx of publishers in another. Changes in the supply and demand within an ad network may drive up or down the bid price of the traffic that advertisers are willing to pay for. If there's a short supply of advertisers or too many publishers with empty ad inventory on a mobile advertising network, expect low bid prices.

The Fifa world cup is spectacular like no other. This year it is likely to cement its status as the world’s mo… Read More >>
Mobile Insights  >>
We use cookies on this site to enhance your user experience. By continuing to use this site you are giving your consent for us to set cookies. More info